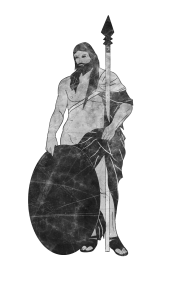 God of the Carnutes tribe.

We have found the Name of this god on four inscriptions. Two are in France and the other two in Austria.

The First is found in Bourges(Avaricum), France from the Gaulish tribe the Bituriges(Bituriges Cubi). It reads to the Divine Augustus and to Mars Mogetius, Gracchus son of Ategnutis gladly dissolved a vow having it [the deities] well deserved).

The Second is in Orleans(Cenabum), France. From the Gaulish Tribe The Carnutes. It reads To God Augustus Mogetius.

The other two are found at a site called Seckau in an old Roman District of Flavia Solva in Austria.

The name could be derived by Protoceltical reconstruction as some Historians believe. Magyo meaning excellent and Eti meaning beyond. This suggesting his name means he who is beyond Greatness or The most Powerful.

He is identified by Interpretatio Romana with the Roman Mars. So in order to understand him more, we must understand Mars. Also, understand the Carnutes tribe as close as we can.

Warlike God But not just limited to that role. Protector of the people, Feilds, and Bounders. Self Governance, Healer, He protects against sickness. Protects the tribe from themselves. If he must fight to protect he will. I don’t see him as a military figure only in times of need. A giver of law and order. Justice and Peace.

Horse – Freedom, Power, Balance, Travel, Movement, Desire, War, Peace, Sun, Spirit, Emotions, Pride, Nobility, Horse helps you see things differently and opens the path to Visionary gifts and a renewed connection with the Earth. Service to others and self. Paths to and from the underworld plus the higher realms.

Reflections of a Modern Druid

In the Nemeton you learn the mysteries

Druid learning, knowledge and wisdom. Excerpts from druidry readings for those who learn better with short texts and main ideas. Almost all material is direct quotes from readings.

Beyond The Black Pool

Horrible History, Stories behind the stones & Fascinating Folklore of Blackpool, Fylde &Wyre and beyond

A Druid and Witch, living in a highrise in the city talks about her experiences

A little space in honour of Mercury and Rosmerta

Custom of the New Galatîs